The weekend started off with an attempt to live-stream my painting at the request of a few who wanted to see how the contrast paints work.  Spent an hour getting things set up with the webcam, the right angle, lighting, etc.  In the end though, it was kind of a wash, as my camera was having issues getting the model I was working on in focus.  Tried it on Facebook rather than twitch, so the rest of the weekend was spent looking up ways to adjust the camera settings in OBS (my streaming software) to possibly allow for recording that way.

End result?  Very little painting done, but a better understanding of what I would need if I was going to do how-to videos.  Next up, I'll try using my old iPad mini to film, then voice-over the painting footage.  Its not ideal, but the camera is still pretty good for being as old as it is.  A few extra steps, but without an actual camera (rather than a webcam) I think I'm going to have to stick to streaming gaming rather than projects for the moment. 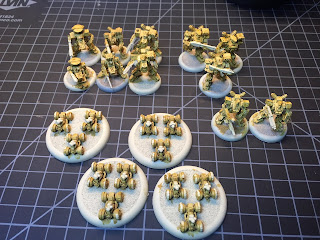 With all this going on, I did manage to get a bit of work done on my northern army.  I have everything base coated with the contrast paint except for a few paratroopers I am saving for when I can get a camera set up to record it.  After the failed stream, I went and decided to knock out all the models on my desk, only to realize at the end I hadnt gotten the footage needed.  So those will be sitting here until I can try it again this week. 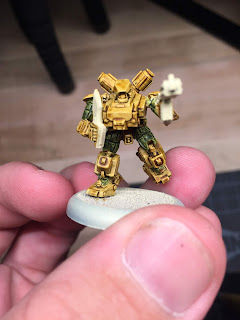 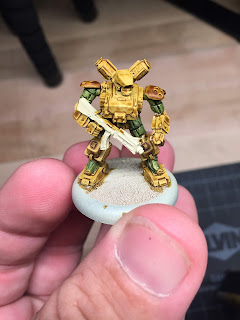 On the left, you have the WiP of the Stripped Down Hunter.  Militarium Green contrast paint for the ballistic cloth on the arms/legs.  It looks good enough in a photo, but doesnt look quite right in person.  The recesses are dark, gives the green look I wanted, but the flat areas of padding are splotchy and not the right shade for me.  So then you have the model on the right, where I took a 'faded OD green' (Mekong Moss from the Heavy Gear paint set) and wet brushed the raised areas.  Much better.  Gives the faded look while also showing off the texture.  Adds more to the process, but gets the right look.  I am still not sure if I should possibly undercoat the cloth areas with a regular green prior to the contrast paint, but in the interest of getting these done with the fewest steps possible, I think they should be fine without it.  Opinions? 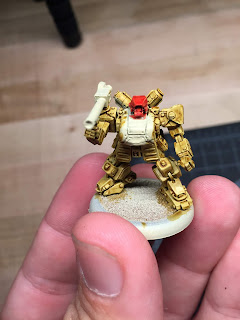 This test was a flop.  I wanted to see how the Blood Angel red contrast paint would look on the head of my airborne troops.  I was going for more of a maroon, ended up with a bright red.  I think I am going to need to re-paint the heads using a dark grey if I want to use the contrast paint, or simply paint them the color I'm going for.  Below is a photo of the Asp I painted with a red shoulder, which was a grey base, and it has more of the muted red look I'm after. 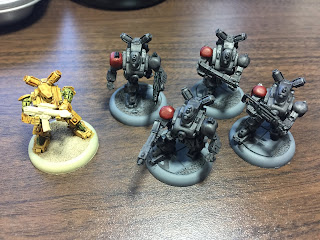 I'll try another one with regular paint before I go and re-do all the heads with a darker base color.  The red shoulders might look darker because of the overall tone of the model, rather than actually being darker.  Still, its progress.